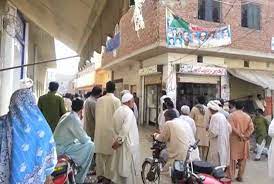 Posted by: admin in Gender Based Violence September 6, 2022 Comments Off on Family protests against rape, murder of minor 35 Views

LAHORE: The family, relatives and neighbours of a 10-year-old girl who was dumped into a swimming pool after rape and murder in Manawan few days back, staged a protest demonstration at Faisal Chowk.

Two other protests were also reported in the City. The employees of the education department staged a protest outside Civil Secretariat and the visually impaired people outside Zahoor Elahi Road for the acceptance of their demands. They also blocked the road for every kind of traffic.

2022-09-06
admin
Previous: Pregnant women caught in floods in dire need of aid
Next: Women empowerment, education a must for uplift, says governor