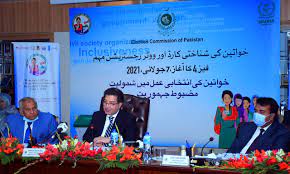 Posted by: admin in Women Development July 8, 2022 Comments Off on Election Commission of Pakistan (ECP) encourages women to register as voters 63 Views

PESHAWAR: The Election Commission of Pakistan (ECP) on Thursday launched a special campaign to encourage more and more women and members of disadvantaged groups to get computerized national identity cards and register themselves as voters.

Joint Provincial Election Commissioner Javed Khan launched the campaign during a special ceremony here, where KP Ombudsperson for Protection of Women against Harassment at Workplace Rukhshanda Naz and Nadra director Shabbir Ahmad were also in attendance.

Mr Javed said the role of the education, local government, and social welfare and health departments was very crucial for the success of the campaign, which was meant to register 25,000 women and other people.

He urged media, civil society and political parties to play their due role for higher voter registrations.

The official said the ECP was committed to ensuring the participation of people from all walks of life, especially women and members of disadvantaged groups, in the electoral process.

“We [ECP] have made our offices accessible to physically-challenged persons,” he said.

Mr Javed added that efforts would be made to ensure that such people reach polling stations without trouble.

Ms Rukshanda said her organization was working to address the issue of workplace harassment in the province. She said the ECP as well as all government departments were cooperating with the ombudsperson’s office.