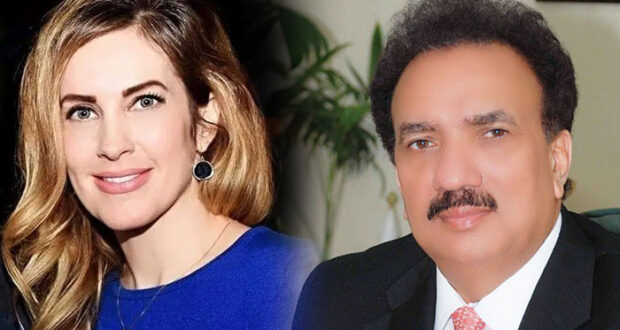 ISLAMABAD: US blogger Cynthia D Ritchie has started a poll on her social media handle, asking people: “Will Rehman Malik have the balls to face me in court?”

Till late night more than 49,000 people had expressed their opinion on it and the results will be announced tomorrow. Former interior minister Rehman Malik said that he would not answer any ‘nonsense’ and ‘filthy’ accusation directly but through court of law.

Ritchie also questioned the accuracy of lie detector tests in Pakistan, asking if Senator Rehman Malik agree to take one, adding that she was ready for it. She said that her primary focus was now the rape case against Rehman Malik and filing against PPP for continued harassment.

About her two pictures with Gilani, she said: “As I have stated from the beginning, the first time I met Gilani was at the Presidency. The below two images are of us in a receiving room – this is where the inappropriate hug took place. I’m sure appropriate agencies have log books/documentation of my visit.”

In a post she said: “There are things about BB I admired. When I defend PK in the West I always mention her as the 1st female PM. However some men in PPP that knew BB, said & did things that were horribly abusive regarding women – including her. I look fwd to a fair investigation.”

Ritchie denied that she had tweeted about PTI minister, terming the tweet fake. She said that had she accused a PTI minister of rape so-called ‘liberals’ would have supported her. “But since we’re talking about Rehman Malik of PPP why are they so quiet? At the very least demand a fair trial, ladies.”

Asim Yasin adds: Rehman Malik Monday comes out with his reaction through video message on the allegations of the rape leveled against him by US national Cynthia D. Ritchie and said that he will not answer any ‘nonsense’ and filthy accusation directly but through court of law.

“I will soon unveil many conspiracies and lay out the facts before the people behind my character assassination. I have already served a notice of defamation as he has decided to legal proceedings against the baseless allegations leveled against him,” he said in a video message on Monday released through his office.

In the meanwhile, Rehman Malik has served another notice of defamation to Cynthia Ritchie for leveling false, bogus and malicious allegations of rape against him in two different talk shows on Pakistani private television channels.

Rehman Malik in his video message has thanked the leaders and workers of his party for their support and has appealed them not to be trapped by conspirators and remain united. In a video message, Rehman Malik said, “I am very grateful to my party, its workers and leaders who always supported me in every difficult time.”

Rehman Malik said that he is well aware of conspiracies against Pakistan, adding that when a US analyst had said that they will destabilise Pakistan through creating disturbance and chaos in Balochistan and Khyber Pakhtunkhwa, he had shut down an American radio station for propaganda against Pakistan. He said that today many conspiracies are being hatched to weaken and destabilise Pakistan through agents, therefore he requests all the people of Pakistan particularly workers of PPP not to fall into the trap of the enemy and remain united. He said, “We have to fight for Pakistan and no one can dare to look down on Pakistan.”

Rehman Malik requested all TV channels not to run interviews and news of false and fabricated allegations against him as he has already written to Pakistan Electronic Media Regulatory Authority for taking legal action against those channels that aired interviews leveling false and fabricated allegations against him in his absence. He urged the TV channels to play responsible role and should not be part of anyone’s conspiracy but discourage immorality. He said that channels should not air allegations until approved.