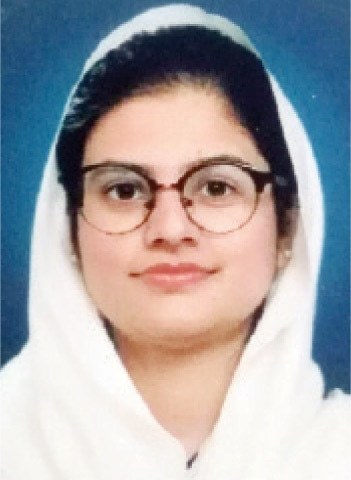 MANSEHRA: Zainab Khalid, who topped the female candidates in Khyber Pakhtunkhwa in the Central Superior Services examinations 2020, wants to work for welfare of women.

“Women have courage and abilities but they are not provided with opportunities to compete with men in our society,” she told journalists here on Sunday.

Ms Khalid, who stood first among female candidates and got overall seventh position in KP in the results of CSS examinations, has become the first female police officer of Mansehra district.

Being the daughter of a banker, Mohammad Khalid, she got her primary education in her native Gari Habibullah town.

Ms Khalid also got a distinction of capturing her place among 20 toppers in the matriculation examinations held in 2011. “The hard work and prayers of parents always pay in our lives and this has happened with me as well. I am proud to achieve this big milestone in my life,” said Ms Khalid.

She said that women mostly remained deprived of justice as they couldn’t express their emotions to show the excesses committed against them by society.

“As an officer in the police department, I will ensure that women are given a due chance to express their problems and pinpoint the issues committed against them that compel them to approach police where even men hesitate to come for justice,” she said.

Ms Khalid said that Sq-Ldr Mehreen Iqbal, who was the second GD pilot from KP, was her first cousin, belonging to Garhi Habibullah.