Couple killed for marrying of their own free will

NOWSHERA: A couple was shot dead by relatives for marrying without their consent here on Friday.

Police said that the couple was gunned down while fleeing in a car on the GT road in Kandar area. The couple had got married some six month ago on their own free will and had been living secretly ever since.

Nowshera Kalan police brought the bodies to the district headquarters hospital for autopsy. Hospital sources said that the brother of the deceased man, resident of Khurabad, Rashakai, said that the victims had married secretly after their respective families didn’t allow them to tie the knot.

Girl’s father, belonging to Mardan and his two sons, and the two brothers of the deceased man were accused of killing the couple. Nowshera Kalan police registered case and began investigation.

In other incident, a watchman, Latif Khan, of Station Bazaar, Pabbi was killed in the wee hours on Friday.

Police said that people found the body of the watchman lying in a pool of blood at Sehri time. They said that the victim was killed by a sharp object. The body was brought to Mian Rashid Hussain Shaheed Memorial Hospital, Pabbi.

Mukhtiar Bibi, wife of the deceased, told police that her husband was allegedly killed by her ex-wife and her son.

Meanwhile, Akora Khattak police arrested an auto thief and recovered a snatched vehicle from him on Friday.

Police said that Muneer Khan, resident Par Hoti, Mardan was arrested at Marhati police post while trying to escape after stealing a car from Jehangira Bazaar. 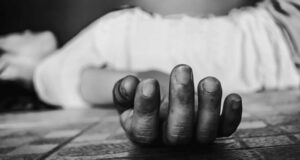