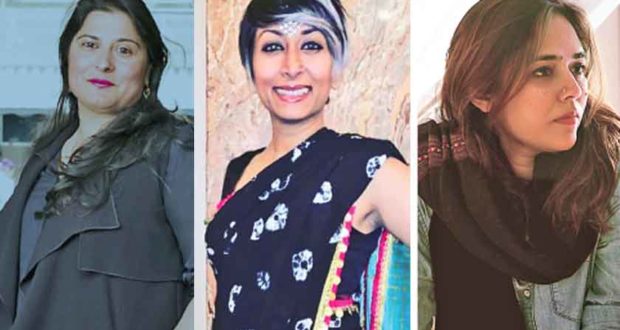 It is a known fact that the film industry, all around the globe, is dominated by men. When it comes to female filmmakers, they don’t get the same recognition or opportunities that male directors do.

However, Pakistani women filmmakers, though less in number as compared to their male counterparts, are just as talented and have been making waves for quite some time.

With some critically acclaimed projects to their credit, female directors have made us proud on more than one occasion. Here’s a lowdown on 5 directors we are hoping will make more films in the near future…

The two-time Oscar winning documentary filmmaker and journalist tops our list. Her documentaries, Saving Face (2011) and A Girl in the River: The Price of Forgiveness (2015), won Sharmeen two Oscars.

She also has three Emmy Awards to her name.

Sharmeen’s world-class storytelling skills are palpable in the impactful documentaries she has made and there is no doubt that she is a leader in her field.

In 2015, Sharmeen Obaid came out with Pakistan’s first ever 3D computer-animated film, 3 Bahadur, which revolved around three extraordinary children, Amna, Saadi and Kamil, who rise from the most unlikeliest of places and save their town from the evil that plagues it. The second instalment of the franchise, titled 3 Bahadur: Revenge of Baba Balaam was released in 2017 and the third part, 3 Bahadur: Rise of The Warriors hit cinemas in December, 2018. These animations, along with other socially relevant series like Aagahi and Shattering the Silence, deliver powerful messages and we’d love to see more from the celebrated filmmaker.

Mehreen Jabbar is a prolific television and film director who creates narratives that have progressive characters with a visual treatment that has now become her signature. Some of her television plays include Doraha, Daam, Rehaai, Jackson Heights and the recently concluded Dil Kiya Karey that featured Feroze Khan and Yumna Zaidi in lead roles.

As for films, her first outing, Ramchand Pakistani was released in 2008 and garnered rave reviews globally. In 2016 Mehreen Jabbar came out with Dobara Phir Se, which featured an all-star cast including Sanam Saeed, Hareem Farooq, Adeel Hussain and others.

Even though she is working on her web series that stars Bilal Abbas Khan, we are eager to know if there is a movie in the pipeline.

Filmmaker Iram Parveen Bilal, who wrote, co-produced and directed the 2012 film Josh: Independence Through Unity that featured Aamina Sheikh and Mohib Mirza among many others, made it to Cannes Cinefondation Atelier earlier this year. Founder of Qalambaaz, a platform that is meant to nurture the growth of screenplay writers, she showcased her latest project, titled Wakhri, at the Cinefondation’s Atelier programme that featured 15 directors from all over the world. The director has also been working on another project called Forbidden Steps that will feature veteran actor Qavi Khan and renowned Pakistani-American actor-producer Faran Tahir. While the release date for Forbidden Steps has not been disclosed yet, we are anxiously waiting for the release of Iram Parveen Bilal’s next venture.

Filmmaker Sabiha Sumar’s acclaimed debut feature film, titled Khamosh Pani (Silent Waters), which released in 2003 is a multi-award-winning film. Starring Bollywood actress Kiron Kher and Pakistani actor Arshad Mahmood, the film is a Pakistan-German co-production and is based on real events that took place when British India was partitioned in 1947.Producer of Academy Award-winning documentary Saving Face and the founder of Vidhi Films, Sabiha Sumar has helmed several projects including Amna Ilyas-starrer Good Morning Karachi (2013) and Azmaish: A Journey Through the Subcontinent (2017). We wonder what she will create next and hope to see it soon.

American-Pakistani filmmaker Afia Nathaniel founded her film production company Zambeel films in 2008. It was in 2014 that she directed her debut feature film Dukhtar (Daughter). Featuring Samiya Mumtaz, Mohib Mirza, Ajab Gul, Samina Ahmed, Omair Rana and others, the film premiered at Toronto in 2014 becoming Pakistan’s Official Submission for Foreign Language Film at the 87th Academy Awards. Based on the story of a mother and daughter, Dukhtar highlighted the topic of child marriages in Pakistan and received rave reviews.

As an active member of the film community, Afia has mentored several filmmakers through the Athena IRIS Screenwriting Lab and the IFP Narrative Lab.

We wonder when Afia Nathaniel will return to the big screen next.