Another peace prize for Malala

THE HAGUE: Malala Yousufzai has won the prestigious International Children’s Peace Prize, KidsRights announced on Tuesday. The 16-year-old will receive the award from 2011 Nobel Peace Prize winner and women’s rights campaigner Tawakkol Karman at a glittering ceremony in The ...

END_OF_DOCUMENT_TOKEN_TO_BE_REPLACED

By: Riazul Haq ISLAMABAD: Keeping with tradition,girls managed to secure the top three positions in the Higher Secondary School Certificate annual examination held in May and June this year. The result of 50,411 candidates who appeared in the examination was ...

END_OF_DOCUMENT_TOKEN_TO_BE_REPLACED

By: Ali Usman LAHORE: Girls clinched the top three positions in the annual BA/BSc exams for 2013, while private colleges outperformed government colleges, according to results announced by the Punjab University on Wednesday. A total of 134,880 students sat the ...

END_OF_DOCUMENT_TOKEN_TO_BE_REPLACED

MALALA Yousufzai has been awarded a prestigious peace prize for her courage and determination. Malala was the latest in a line of notable recipients of the Tipperary International Peace Award. In her acceptance speech before an audience of around 200 ...

END_OF_DOCUMENT_TOKEN_TO_BE_REPLACED 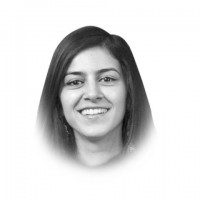 By: Sabina Khan Women in Karak have been prohibited from leaving their homes without a mahram due to the reason that they spread vulgarity and distract men during the holy month. Perhaps, a better way of ensuring that these weak-willed men stay chaste would be for the primitives to blindfold themselves and stay in their [...]