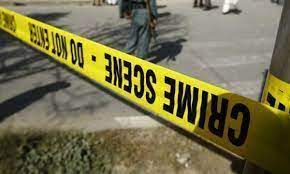 LAHORE: An 18-year-old girl was shot dead by her brother in the name of honour in the limits of Haier police station on Saturday. The accused Ahsan killed his sister Malaika by shooting her in the head. Police arrested the accused and recovered the murder weapon.

Kidnapped Woman, her child reach City: A woman, who along with her child was kidnapped in Balochistan, escaped from the clutches of the kidnappers and reached Lahore.

According to the police, the victim identified as Gul Bano, 35, and a young child reached Nawankot by bus. Patrolling police spotted the woman crying on the road and brought her to the police station. The abduction case of woman was registered in the Panwan police station in Balochistan.

The accused were identified as Asim, Arsalan and Khawar. According to the police, the three were signaled to stop by the PRU, on which they opened fire. Khawar accidentally injured his partner Arsalan during the crossfire. Police said that Asim was wanted by the police in heinous cases.