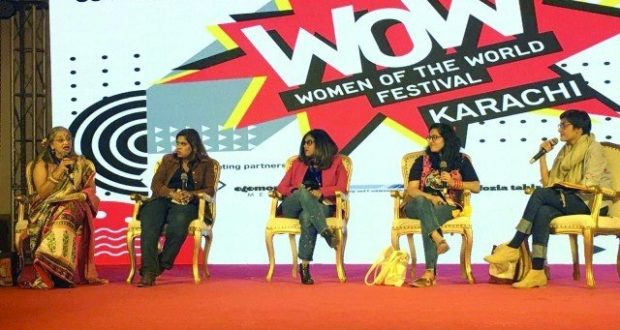 Posted by: admin in Gender Issues December 16, 2019 Comments Off on ‘Belonging to minority community on top of being woman makes matters worse’ 978 Views

Discussing the challenges that Pakistani women belonging to the minority communities face, speakers at a session of the Women of the World (WOW) Festival on Sunday said that lack of social and economic empowerment further deprives the most vulnerable among the most vulnerable.

The WOW Festival, a two-day event organised by the British Council Pakistan, concluded on Sunday. The session in question was titled ‘Minority Women on the Rise’ and moderated by Fouzia Younis, a British diplomat in Pakistan.

Radha Bheel, a leader of the Dalit Sujag Tehreek, said that although women in Pakistan have been facing a number of challenges in general, being a woman and belonging to a minority community makes matters worse.

She said the women from minority groups face comparatively more discrimination on the basis of their respective religions. “In our villages Hindu women cannot wear their traditional dress, and because of their language and accent, they feel vulnerable.”

Referring to the death of a Christian sanitary worker who had died in 2017 at a hospital in Umerkot district after fasting, she said the doctor refused to touch his “unclean” body, adding that doctors usually do not treat the women from minority communities properly

because of their respective religions.

She mentioned that within the Hindu minority, women belonging to the lower (scheduled) caste are even more vulnerable. “Most of the lower-caste Hindu women are peasants, and the young and beautiful among them are the most vulnerable to being kidnapped and later converted to Islam,” she said, adding that minority families have stopped sending their female children to educational institutes out of fear.

Safina Gill, a Christian rights activist, said the role of the women from minority groups in education, employment and politics is unsatisfactory. She said that majority of the minority population in Pakistan live below the poverty line and there is no proper implementation of the job quota reserved for them.

Referring to the allocation of 33 per cent seats for women and 10 per cent for religious minorities in all the legislative assemblies and local government bodies, she said the state has provided a great opportunity for women to make efforts to resolve the issues that their gender faces.

Sayed Gul Kalash, a Kalash activist and archaeologist, said that every woman who steps out of her home faces a number of challenges on a daily basis. “Every woman has her own story whether she belongs to the minority or the majority.”

Sharing her own experiences, she said that because most people have little knowledge of the Kalash community, the biggest challenge for her was to assure the people that she believes in God.

She added that unfortunately, the minority community is afraid of sharing their views due to the fear of blasphemy allegations. “We have to think many times what should be said and what not.”

She also said that a rapid decrease in tolerance in society has been emerging as a great challenge. She added that when she became an archaeologist, she was the only woman in Khyber Pakhtunkhwa’s 14 museums.

Lynette Viccaji, an educationist, said she feels ashamed because of the fact that she has not faced such discriminations due to the socio-economic conditions of the minority communities.

“Christians in Pakistan are not one monolithic group. I am an Anglo-Indian Christian. Our women are allowed to work outside the home. Between the 1950s and the 1970s, women from Anglo-Indian or Goan communities were employed in major offices.”

The moderator said that as a British Muslim, she understands the challenges that Pakistan’s women from minority groups face. She said she was the first girl in her family in Britain who went to college for acquiring higher education.