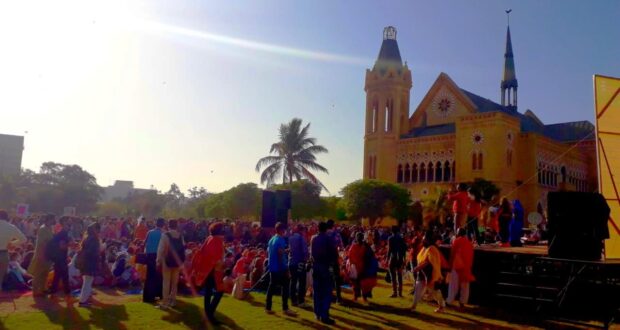 KARACHI: Being the Women’s History Month, March has the potential to get your Irish up, make you uncomfortable, make you question your claim to feminism or lack thereof, and dismantle patriarchy to some extent.

This year too, despite the pandemic, March didn’t lose its charm. And even though the existing health crisis prevented many from attending to women’s issues, March became a harrowing reminder that the issue of women and gender minorities can never be ignored.

And with that reminder, returned Aurat March, with greater fury and fewer numbers, reduced to a sit-in in Karachi. This year’s march took place on Monday (International Women’s Day) and despite a decrease in attendance, it featured the same zeal and enthusiasm necessary to topple a troubling system. The crowd, mostly in hundreds, demanded rights while chanting various slogans, many of which were inspired by the ongoing pandemic.

The venue echoed with chants of ‘Hum lekay rahengay, Azadi,’ (we will take our freedom, come what may) as hands swirled in the air to the songs of empowerment.

The evening saw diverse groups of people coming together for similar objectives. Their pallet of protest could either be perceived as a threatening array of colours too bold to be worn by the ordinary or a rainbow that fades eventually but scrapes its way across the sky, demanding to be noticed and remembered.

Many carried placards, raising their voices against rape, sexual harassment, consent and imperative issues faced by women today. Not only the attendees made noise about problems pertaining to what women have faced in recent times, but many demanded justices for their predecessors – mothers, grandmothers and anyone who faced injustice at the hands of patriarchy.

Some posters that caught the eye were plastered with the “The female is future”, “No means no”, “A divorced daughter is better than a dead one”, “I am raised by a man who is a feminist and I am raising a man who will be a feminist”, “Stop underage marriages”, “Stop killing transgenders”. Many placards shed light on martial rape, honour killings, on smashing the patriarchy, for rallying against child marriages and child sexual abuse as well.

Apart from the placards and colourful writings, attendees went on to ‘wear’ their protests against misogyny with masks, badges, dupattas adorned with the writings too important to go unnoticed.

“We started Aurat March in 2018, three years have gone by and this is our fourth year, but things are not changing,” remarked activist Sheema Kermani, lifting the crowd with her clear speech and powerful arguments. “We see that patriarchal violence is on the rise, we have the highway gang rape case, little girls are as unsafe as they ever were and the person saying #MeToo is facing a defamation suit. If it wasn’t for patriarchy, none of these incidents would occur and the accused would not have the power to counter-sue the survivor,” said Kermani.

She further reinstated how the past year had led to a rise in domestic abuse across the world, all of which falls under the umbrella of patriarchal violence. “There has been so much domestic violence, and cases have surged across the world. Women who have been forced to sit at home and work-from-home have suffered at the hands of their misogynistic partners, fathers or brothers,” claimed Kermani.

Asked if the prior marches brought little to no change, how would this year’s sit-in make any difference, Kermani said, “We have our charter of demands, and if these demands are not met, we are going to do a dharna (sit-in) again.”

Perhaps the reason the Aurat March charter of demands are rarely ever met is because of the way the march itself is represented in the media. But taking no prisoners, even the sensationalism is welcomed by the organiser. “It is fine, let them sensationalise, we get more publicity, more people talk about the march. It is a good dialogue-starter and we need a dialogue to start. We stand by all the slogans and everyone has the right to free speech,” she concluded.

While the march on Monday witnessed women from all walks of life to document their displeasure about how their voices are curbed, no notable celebrity, except Adnan Malik, was present at the Karachi Aurat March.