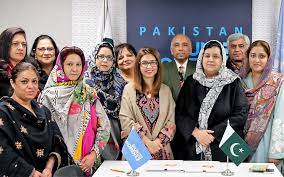 Accord inked for protection of women’s rights

Posted by: admin in Miscellaneous News October 15, 2022 Comments Off on Accord inked for protection of women’s rights 48 Views

Islamabad: The Trust for Democratic Education & Accountability (TDEA) and the Balochistan Commission on the Status of Women (BCSW) have agreed to work together for the promotion and protection of the rights of women and girls in Balochistan province.

The two organisations signed a Memorandum of Understanding (MoU) here Thursday. Under the MoU, TDEA will support the Commission in undertaking research and advocacy initiatives, setting up a complaint registration mechanism to deal with cases of violence against women, and taking up capacity-building initiatives to improve institutional response. They also agreed to work on strengthening the Commission to deliver effectively on its mandate as per the Balochistan Commission on the Status of Women Act 2017.

The BCSW was established in September 2022 with a crucial role to play in monitoring the administrative, legislative, and fiscal measures taken by the government for the advancement of the rights of women in Balochistan as per the Constitution and International Conventions signed and ratified by the Government of Pakistan.

Speaking on the occasion, BCSW’s Chairperson Fauzia Shaheen expressed her hope that the MoU would lead to a fruitful partnership between the two institutions. She was confident that such productive ventures would go a long way in improving the lives of women in the province.

She was hopeful that TDEA’s insights related to institution building as well as women’s rights would help evolve various institutional systems and program functions of the Commission. While talking about the need for an autonomous and assertive commission, the Chairperson said that the Acts must have the provision for continuity of the Commission with a time-bound legal provision to bring the new Chairperson after the tenure of the existing Chairperson ends.

Civil society organisations’ support is critical to the efficient and effective functioning of the Commission. The Commission has a good start, its budget has been released, and the rules of business and service are being finalized”, she said.

TDEA’s Chief Executive Officer (CEO) Shahid Fiaz congratulated the Chairperson on the formation of the Commission and the appointment of its members. He said that statutory commissions on the status of women are pivotal for the promotion and protection of their rights in Pakistan. Mr. Fiaz said that TDEA is already supporting the Sindh Commission on the Status of Women (SCSW) and the Sindh Human Rights Commission (SHRC).