Latest News
Home / Economic Empowerment / A year on: ‘Women on Wheels’ could run off the road 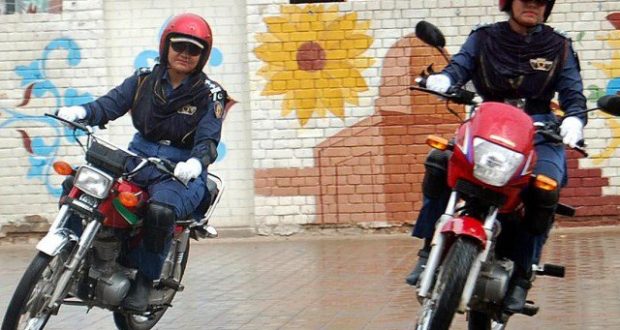 A year on: ‘Women on Wheels’ could run off the road

RAWALPINDI:A provincial project to train women to ride motorbikes has lost some of its steam since the new government took over. But after training some 300 women to ride, the Rawalpindi traffic police is still as eager to train those women who want to learn.

Previous Punjab chief minister Shahbaz Sharif had started the ‘Women on Wheels’ programme in five cities of the province including Rawalpindi, Lahore, Faisalabad, Multan and Sargodha. The aim was to enable women to move more independently.

Under the programme, the provincial government aimed to provide motorbikes to some 3,000 women on subsidised rates or on loans with assistance from the Bank of Punjab after they cleared the training course.

They said that the trainees were taught on the standard 70cc and the more powerful 125 ccC motorbikes – the two types of motorbikes which are the most common on Pakistan’s roads and provide the best fuel economy.

The 300 women who availed the training in Rawalpindi were mostly students, lawyers and even some policewomen. After they completed the training course, they were assisted in acquiring driving licences.

Rawalpindi Chief Traffic Officer Mohammad Bin Ashraf told Daily Express that the city traffic police continue to train women who are eager to learn how to ride a motorbike. He added that women are faster on the uptake and learn how to ride bikes quicker than men.

He added that women rarely commit any traffic violations, noting that no woman had been issued a traffic ticket last year.

CTO Ashraf explained that the women they have trained ride more carefully than men, which not only keeps them safe but also pedestrians and other motorists.

Elaborating on the need to enable women through the training, Ashraf said that the project will empower women in a way that they can not only ride a motorbike but avail a mode of transport which is more economical than a car.

But as the anniversary of the project approached, it finds itself in the doldrums.

The Pakistan Tehreek-e-Insaf (PTI) government has shown scant interest and attention for the project. Sources say the government has put a halt to providing motorbikes on subsidized rates or on loan.

This is creating a problem for the women, especially those who hail from the less-privileged strata of society, who were seeking training to ride a motorbike since they will not be able to purchase any bikes to ride.

They are, hence, compelled to purchase motorbikes on the market rates.