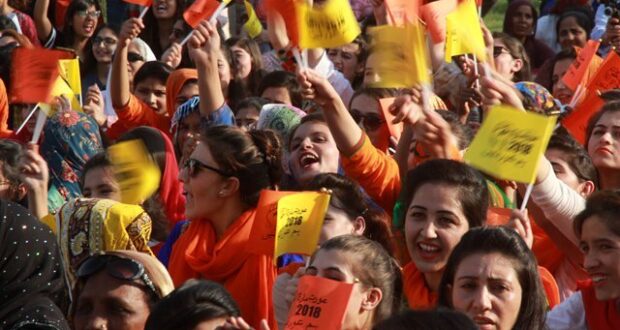 Voices raised for rights ahead of Women’s Day

The inaugural session of the two-day second Women’s Conference at the Arts Council of Pakistan (ACP), Karachi centred on the themes of women’s rights and independence, with speakers calling for liberating women from the shackles of societal restrictions.

The ceremony commenced on Saturday with performances by bands Drum Circle and East Coast Music Association.

This was followed by an address by ACP president Muhammad Ahmed Shah, who highlighted that women had been raising voice for their freedom even before the World War I.

“And their struggle continues to this day,” he said. “Unfortunately, the condition of women in developing countries is worse than elsewhere and hence, we need to look past slogans and resolve real issues through negotiations.”

He further stated that men and women needed to work together to build a better family and society.

Distinguished Indian writer and social activist Noor Zaheer, who joined the session via a video link from India, said women today didn’t lag behind men in any sector.

She also highlighted the role women played during protests.

Zaheer said organising women’s conferences was extremely important as such events provided women the opportunity to openly speak about their issues.

“We will keep shouting slogans [for our rights] as long as our demands are not fulfilled,” she asserted.

Diplomat Dr. Masuma Hasan, who was the keynote speaker at the event, recalled that the movement for women’s rights began on March 8, now commemorated as Women’s Day across the world, in the United States of America.

“This day celebrates women and their success,” she said. “I salute brave women who struggled in the past, and because of their struggles we have been given our rights today.”

“I was never a part of any feminist movement, but men’s reaction to the slogan made me a feminist,” she said.

Huda went on to say, “[Such slogans are raised] in societies where women give birthslike machines, fights for their rights are misunderstood and men claim to be the protectors of their bodies.”

Huda underlined the importance of women being aware of their rights, “because a woman can only raise voice for her rights when she knows her rights.”

The first session of Second Women Conference, Meri Zindagi, Mera Ikhtiyar (my life, my authority) was conducted after the inaugural. Mehnaz Rehman, Malika Khan, Sheema Kermani and others spoke during the session. The first session was followed by another one focused the ‘Economic Empowerment of Women’.