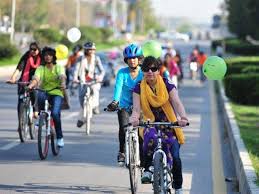 Notices issued to govt for not allowing cycle rally for women, transgenders

PESHAWAR: The Peshawar High Court (PHC) on Thursday sought reply from the Khyber Pakhtunkhwa government and deputy commissioner Peshawar in a petition against the decision of the district government barring the non-governmental organisations (NGOs) from holding the “Cycle Rally for Females and Transgender” after succumbing to the pressure and intimidation from some clerics.

The Pak Development Mission (PDM), a non-governmental organisation, had filed the writ petition, seeking direction for the provincial and district government to facilitate and provide adequate security to organise the “Cycle Rally for Females and Transgender” in the city.

Barrister Masroor Shah, counsel for the petitioner submitted before the bench that the first-ever “Cycle Rally for Females and Transgender” was organised by NGOs including Zamung Jwandun, Pak Development Mission and Professional Development Organisation at Hayatabad Sports Complex on January 19, 2019.

He pointed out to the bench that the deputy commissioner had first granted written permission to the organisations for arranging the event, which was placed on record.

The counsel contended that all arrangements had been made for holding the rally by the organisers and invitations were widely circulated.

In the meanwhile, he said, the deputy commissioner in an unlawful manner barred them from holding the cycle rally after succumbing to the pressure and intimidation from a few clerics.

He said instead of providing security, the deputy commissioner succumbed to the pressure of some clerics.

The lawyer informed the court that the petitioner wanted to organise the rally on March 8 International Women’s Day and have sought direction for the government to ensure and provide security for the rally.