Karachi: Pakistan Muslim League-Functional MPA Nusrat Seher Abbasi expressed deep concern over the injustices being meted out to women irrespective of the laws, resolutions and bills passed in assemblies.

While talking to The News on Sunday she said, “This is an important issue; for the past five years more than 100 resolutions and bills have been passed in the national as well as the provincial assemblies. But we don’t see any implementation”.

Responding to a question on whether women are provided with due justice in cases of domestic violence and honour killings, she said there was a need for huge reforms at our police stations. She was of the opinion that our masses lack awareness regarding protection of victims.

She said a huge number of rape incidents occur in the interior Sindh but most of them go unreported as female victims are either shunned or humiliated because of which they fear to bring the assault into notice.

While putting the blame on the feudal system and feudal lords, Abbasi said women were not allowed to report rapes by influential people in villages. They are denied their basic human right of reporting an injustice.

She said harassment had become a normal routine for the women of Sindh. “There are not only cases of domestic violence and rape but they are also sexually harassed in factories offices,” she added.

Commenting on the level of distrust people hold against police personnel, Abbasi said “Even men are scared to report incidents at the police stations let alone women”.

Women rights issue is always bogged down whenever she tries to bring it up in the assembly, claims the minister. She said the speaker deferred the hearing of the matter after labelling it a non-issue.

She emphasised the need for a psychologist as well as trained and educated officers at police stations.

“In the absence of proper implementation, merely passing bills and resolutions won’t solve the issue,” she maintained.

She further said the prime minister should have taken up the matter during a recent meeting held to review the law and order situation.

She mocked the law passed for reprimanding departments for not implementing laws falling within their ambit. “Nobody in this land is held responsible for violating laws,” she added. “Women’s issues are always swept under the carpet in our male-dominated society.”

Previous: Man kills two nieces and a nephew
Next: Pakistani sex slaves escape from their ordeal 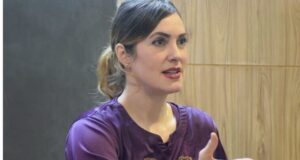