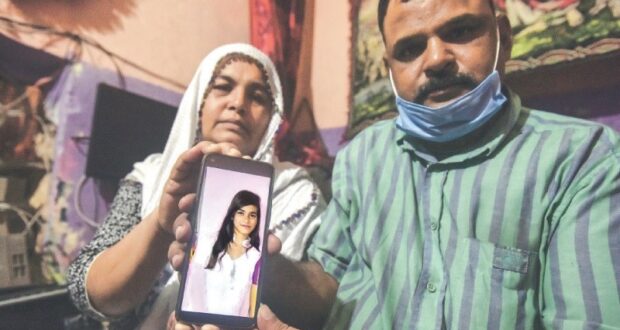 KARACHI: It has been 10 days now that young Arzoo, daughter of Raja Lal, a Catholic Christian, has been missing from her home. Her family knows exactly what happened to her but all their crying and complaining seems to be falling upon deaf ears.

It is a sensitive issue for them. After all, their little girl was abducted. The City Railway Colony address forwarded to the media as the girl’s home turned out to be her aunt’s (phuppi) home. As one sought help with her address from her neighbours, and reached there, the woman looked blank. She said she didn’t know anyone by the name of Raja Lal.

“Raja is a common name. You must have the wrong address. But come inside, you look tired. Have some water,” she offered as she turned around to put a finger over her lips when only a journalist could see her face. Then she turned to her neighbours again and thanked them for helping the journalist with the address.

“Look, please don’t talk about it here. These people don’t follow social media. They don’t know anything about what happened to my niece. I’ll call my brother for you so that you can speak to him over the phone,” she explained.

While her daughter, who resembled Arzoo’s pictures very much, was calling her uncle, the woman said that Arzoo is only 13. “She is as old as my daughter here. And the man who took her, Azhar Ali, is at least 45. He used to come to my brother’s place with toffees and sweets ever since Arzoo was a toddler. He always had an eye on her,” she said.

Arzoo’s father came on the line. “My daughter went missing on October 13. It has been 10 days now. We have been running from pillar to post but nothing has come out of it so far,” he said.

“Another problem is that the man’s two brothers are employees with Sindh police,” he said, adding that he was at St Patrick’s Cathedral as the priests there were going to come with him to the police station. He also requested a meeting in person.

It was not easy catching up with Raja Lal as he only reached home around 8.30pm on Friday. “After the police station, I was with a lawyer,” he explained when one met him at his little home behind Cantonment Railway Station. Arzoo’s mother, Rita, was also there as were her three siblings.

“Born on July 31, 2007, Arzoo is our youngest child. We have two older daughters, Sonia and Mehwesh, then a son, Shahbaz, who is 15 and then Arzoo, who is only 13. But the rascal who abducted her has prepared fake papers to show that she is 18 years old,” the mother explained.

She pointed towards the house right opposite their’s. “Azhar Ali lived here with his other brothers. They are three to four brothers all of whom have government jobs. Azhar works with the water board,” she said.

Rita said that both she and Arzoo’s father had day jobs, which they have also lost while looking for their daughter. “My husband is a driver and I worked in a school. Since we have been unable to go to work in the past 10 days, we have both been sacked by our employers,” she said.

She also said that due to their day jobs, they would trust their neighbors to watch over the children after they came back home from school every day. “We trusted them. And look what they did,” the mother cried.