The court also called her petition as nothing except a counterblast in order to settle the scores with the respondents. The court also declared that the petition by Cynthia seems to be politically motivated. 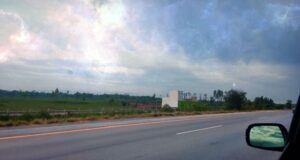